Information on biodiversity is required to undertake ecological studies on communities and ecosystems. As it is a difficult task, certain taxa that represent the main functional groups are targeted.

It also happens with the studies to determine anthropogenic effect, where identification of human impact bioindicators is critical to draw conclusions and propose the right measures to manage natural resources. Fish are among such bioindicators due to their ecological role through predation, herbivorism, bioerosion and trophic-related aspects. Furthermore, the importance of fish is even greater because they are the principal resource of fisheries, the main human activity in the world ocean. 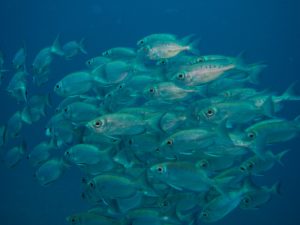 The most recent list of Cuban fish comprises 1114 species, including 38 fresh-water species, which are also salt- water tolerant. Of the strictly marine species, 85 are cartilaginous fish and 991 are ray-finned fish. Groupers, Jacks, Snappers, Wrasses, Blennies, Gobies and Grunts are the most diverse families. Other papers on the composition of the fish species of some localities of northwestern Cuba, mangrove and reef fish of the Sabana-Camaguey archipelago and the fish species of Jardines de la Reina National Park have been published.

Scientists from the Coastal Ecosystems Research Center (CIEC), based in Cayo Coco, Cuba, have studied the biodiversity and ecology of the northern coast of the province of Ciego de Avila, from 1995 to 2012. Fishes have been targeted among the conspicuous fauna, and the first inventory has already been prepared. Species identification was done in situ, using SCUBA and snorkelling techniques in coral reef habitats at different depths. Karstic caves, oceanic waters and mangrove habitats were also surveyed. The inventory includes 214 fish species from 130 genera, 73 families, 22 orders and 2 classes. The best represented fish families are Groupers, Jacks, Grunts and Mackerels. Abundance of big top predators (groupers, snappers, barracudas, jacks and sharks) is low in the northern coast of Ciego de Avila province, probably as the result of the fishing effort. In the area, 19 % of the Cuban fish species has been reported, 20 % of the strictly marine fish, 15 % of the cartilaginous fish and 20 % of the ray-finned fishes. Diversity of taxa is higher than in the northwestern and northeastern regions of Cuba, but lower than in Jardines de la Reina, while the most diverse families are generally the same in the said regions.

Since 2007, the presence of the Lionfish – a highly invasive species- has been reported in the northern coast of Ciego de Avila. Further research should be undertaken to know abundance and distribution of the aforementioned species in the region.