The protected wetlands of the Zapata peninsula attract hundreds of thousands of migrating birds every year. Many birds winter in Cuba, and many more use the island as a stopover when migrating between North and South America. In addition, the other marine parks of Jardines de la Reina, Cayo Largo, Isla de Juventud, Jardines del Rey, and Cayo Romano act as important and irreplaceable sanctuaries for these migratory species. The protection of vital habitats and nesting sites is a cornerstone environmental project drawing professional researchers from around the world to better understand these key species and ecosystem interactions. 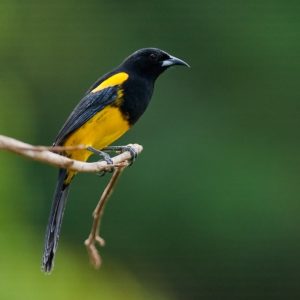 The International Union for Conservation of Nature (IUCN) is composed of government and civil society organisations. It was created in 1948 and has become an important environmental union that bring together a wide variety of stakeholders, science and traditional knowledge to undertake conservation projects in the pursuit of sustainable development.

The IUCN has an important tool to promote species conservation: the Red List of Threatened Species. It includes animals and plants that face risk of extinction at a global scale under the categories of Least Concern, Near Threatened, Vulnerable, Endangered, Critically Endangered, Extinct in the Wild and Extinct.

The Common black hawk is scarce but distributed all over the archipelago. Mangroves and coastal swamps are its natural habitat. It is endemic to Cuba and is included in the near-threatened category because although it may be common in some areas its habitat is very specialized.

The White-crowned pigeon is a common permanent resident and transient in Cuba. It lives in semideciduous forests and mangroves. In Jardines de la Reina its populations are declining. It is included in the near-threatened category as it is restricted to areas where deforestation and habitat degradation are significant. Hunting pressure may another cause of their population decline.

The Golden – winged warbler is also included in the near-threatened category. However, it is a very rare transient in Jardines de la Reina; it was reported in 2006 but the place of the sighting is unknown.

The Peregrine falcon is in the Least Concern IUCN category. Although it is an uncommon winter resident and transient in Cuba, it may also breed in the archipelago. Its habitat is quite diverse, from swamps and marshes to savannas and cities.

The Merlin is also in the Least Concern category. Like the Peregrine falcon it is an uncommon winter resident and transient in Cuba that lives in open fields and low coastal vegetation. Populations of this species are said to be in decline In Jardines de la Reina.

The Osprey is a common permanent and winter resident and also transient in Cuba. It lives in shallow waters around cays, lagoons and basins, less frequent in coastal areas. Populations are declining in Jardines de la Reina. It is listed under the Least Concern category of the UICN red list and in Appendix III of CITES.

Regarding the American flamingo,population size is very large at a global scale, so the species is evaluated as Least Concern and listed in appendix II of CITES. Nevertheless, this is a very sensitive species particularly to noise and human activity. In some places of the mainland, colonies are threatened by poaching for food.

The Barn owl has stable populations according to the IUCN and consequently evaluated as Least Concern. It is a common permanent resident in Cuba.

The Cuban emerald is not really endemic to Cuba in spite of its name; it is also found in some islands of the Bahamas. It is a common permanent in the island and in many of the surrounding cays.As the species has a very large range is evaluated as Least Concern by the IUCN. Although the said taxa are in the Least Concern category at a global scale it does not mean that in Jardines de la Reina they can be ruled out by park managers. As explained, it has been documented that in some cases their populations are in decline for reasons that must be subject to further and thorough research to inform decision makers so that they can make a proper use of the park’s habitat diversity.